This morning before we went to work, one of our cats was acting really weird that we had to stay with her for a while to see what was happening. I just want to log this for future references. If you are super rationalist, anti-superstition, fearful or against animals, now is the time to press the “Back” button.

If you don’t already know, we have two cats: Sansa is a lean female tuxedo and Bran is a fat male ginger. They’re both a little over one year old (it is not possible to know the exact age of Bran as he was a stray but the vet said he is around the same age with Sansa). Both are spayed/neutered, if that matters. 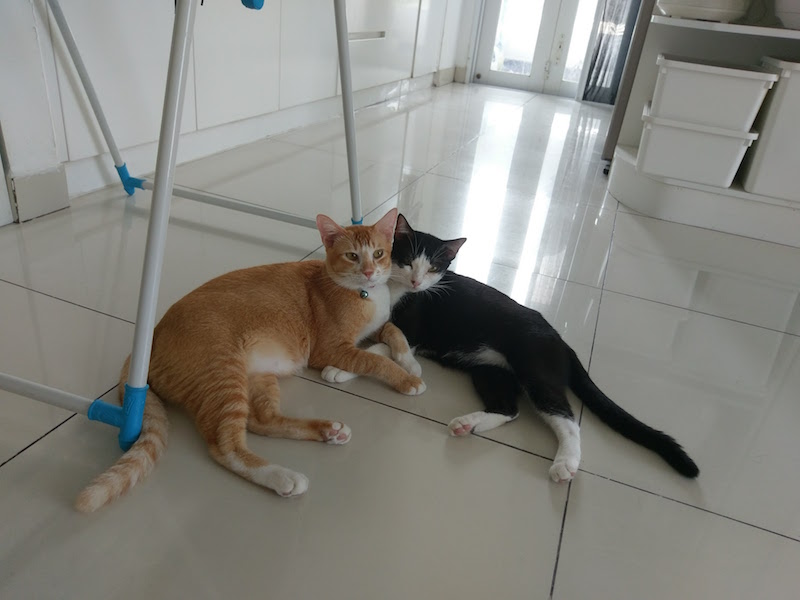 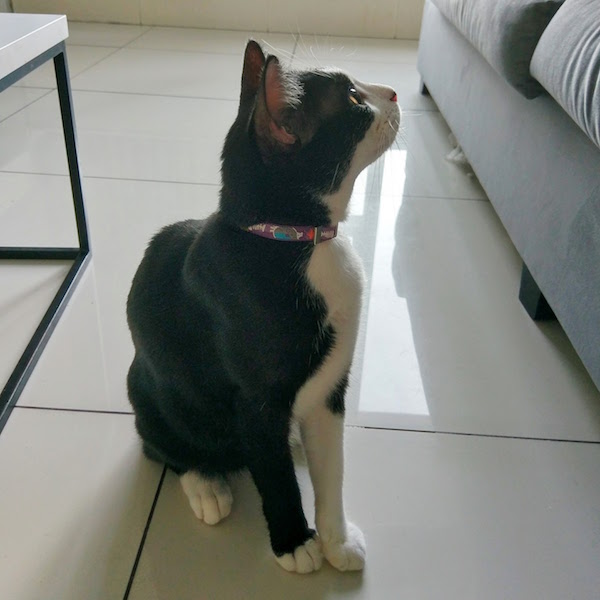 So, today before we were about to head out for work, Sansa displayed abnormal behaviours. We always close the door to our bedroom when we go out (because otherwise they’ll just wreck everything), but today Sansa was meowing and scratching the bedroom door as if asking us to let her inside the room. Unlike Bran, she is not a vocal cat at all, she barely meows, but this time she was meowing constantly, with her lower jaw a little bit shaking. I opened the door to see what she would do inside the room, I thought there would be a gecko or something behind the door that she just wanted to catch.

But she didn’t go for any particular place like when she is hunting, she went to behind my dressing table and looked out to the door from there, as if wanted a safe place to protect herself. She also went around the room, looking up at the ceiling and meowing. She was so frantic that I knew something was wrong, and I knew she wanted to tell us something.

At this time my only explanation is that Sansa was seeing some paranormal activities, probably something so scary or threatening that she wanted to go to our bedroom to stay away from it. I didn’t know what to do, so I asked my husband Sơn to light some incense sticks on the altar. I asked the gods and our ancestors to protect us and the cats, and to drive away any evil spirit in the house.

At the same time we pet Sansa to soothe her and let her know that she is protected. She was still pretty panicky, she went to rub her head at the door, and then at Sơn, back and forth. After a while she agreed to get out of the room, still rubbing her head at us though. When she seemed to calm down a little, we had to leave because it was late.

Sansa seeing the paranormal is the only explanation I see in this situation. I’ve heard lots of stories about cats seemingly seeing spirits, especially black cats. Sansa is not black entirely but more black than white, and she is always more attentive than Bran. Cats can see more spectrums of light than us, so they do see things that we can’t. Sơn offered another theory, that Sansa sensed that something bad would happen to us if we leave at that time, so she tried to make us stay at home, or at least, delay our departure. That seems far-fetched but it still sends chills down my bone. I guess we’ll never really know.

You may ask where Bran was all that time? Well, he seemed to be oblivious to the whole thing, still doing fat cat’s stuff, like running to the corridor and eating trash, or lying on the floor with his eyes half-closed while his sister was meowing frantically. I’m amazed at how he was so oblivious to what Sansa was going through, because normally they have pretty good connections, like running to the balcony at the same time when hearing birds chirping, or if one is in the bedroom with us, the other would always scratch the door to make noise so that we’ll let him/her in too. Another story where I think my cat has spiritual connections. When my childhood cat – which lived until 16 years old and now is my tattoo – died, I had a dream about her. In the dream she rubs her head to my leg several times, like she was asking for food. I poured dry food onto her bowl, but she didn’t eat, she looked at me and then ran outside to the rain where her cat friends (she never had any animal companion when she was alive) were waiting and together they ran away. I didn’t think much of the dream then, but later I realised that may be my cat saying good bye to me one last time before taking off to heaven. It also happened that I didn’t dream it right after she died, but only after I poured her ashes into a lake near my house. I kept her ashes in the house for a few days because I thought she would like to be home, and I wasn’t ready to part ways with her. After that time, I’ve never dreamed of her since.

I went vegetarian for one month and this is what happened