Drowning in the flows of thoughts I traveled back to the time of 3 years ago. It was on 28/9/2006, the day my most beloved band of all time announced their retirement. I still remember it was totally a shocking news, not to only me, but almost everyone else, when there had been no sign indicating that they were going to break up before that. That was during my hard time in high school, and their music had been the only thing that kept up my hopes. At the time I felt like I lost a part of my body, or a long-time soulmate. I remember on that day nothing could stop me from crying. I went to school with red and swollen eyes, and bursted into tears again as soon as I saw my best friend in school. Until now, it is still the biggest loss I’ve ever experienced.

I was not the only fan that had that reaction. Because of the pressure from shocking fans, the band decided to have their farewell liveshow, to tribute to their fans and, also to burn for the last time on stage. I was very lucky to be selected to work in the volunteer team, to promote for the liveshow. In all their previous shows, the volunteer team helped contribute a lot to their success, and it was really an honour to be a member. And that’s why I couldn’t believe I was selected to be in the team for this most special show. It was my first, but also my last time. The team had about 100 members, distributing posters and leaflets around universities and high schools in the city. I was at the beginning of Year 11 at the time, the youngest member, and also the only one whose means of transport was bicycle.

I can’t say enough about all the feelings at that time. All I can say is it was really a time to remember for the rest of your life. I rushed after school to go to work, and then usually had to rush from work again to go to extra class in the afternoon. By bicycle. And since I was the youngest, the others cared about me just like their little sister. We really had a great time together.

Then finally the time of the show came. I still remember I had a chance to be at the site to see their last rehearsal, before the show took place at night. I also remember I talked to one band member (the one I was really fond of) and had a photo with him. I’ll never forget he said “Don’t worry, sooner or later, we will be back”.

On that night, December 2nd 2006, the show I longed for the most, but also the one I wished it never happened, was really on. Before the show started, we all were forced to sit down, and that’s why there was a moment I was nearly very close to death. It was when we were all sitting down, then the music suddenly started, thousands of people behind me started to shout and stand up, and I was just a moment after that, but already I was pushed lying on the ground, with the wave of people stepping on me. I don’t really know who it was, but all I remember was fortunately there was this volunteer next to me, he or she pulled me out from the crowd. I wasn’t hurt much, just some scratches and a bleeding lip. Hah.

We volunteers then had another job, which was standing and binding tightly together to make a “living fence” to prevent fans from getting to close to the stage. Because you know how wild a rock concert can be. And I was a very little girl at that time. (But the good thing was you were a volunteer, so you had the closest place to the stage) Although we bound very tightly, but since ten thousand of totally wild and crazy people pushing behind, there were moments we felt we couldn’t even breath, plus the air was so thick with so many people, sweat, and things. Fortunately, after that, another volunteer, seeing me so small for the job, asked a security man for me to stand inside the iron fence. Thanks to him, after that I had a, like, V.I.P, spot to enjoy the rest of the show. Really comfortable.

I am not going to say how emotional the whole event was. We volunteers after that all hugging and tearing, fans singing all the way out, and band throwing their souvenirs to us.

I am not a rock fan, I mean, not a rock fan if you define a rock fan is one who is only passionate about rock all the time. But I have to say that this music had been playing a great part in shaping my personality, to make me who I am today. And I am glad that I get some wild and crazy spirit from it. 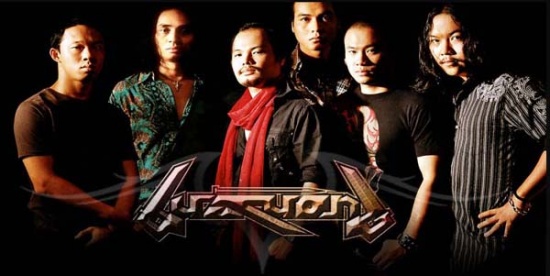 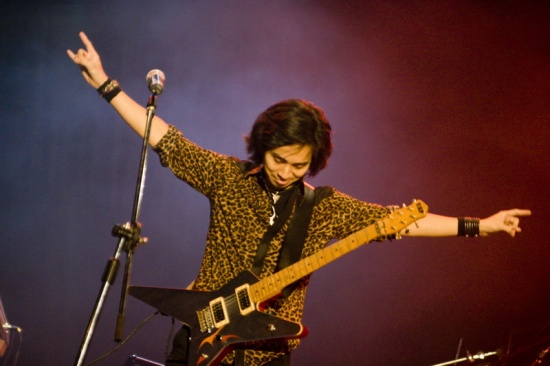 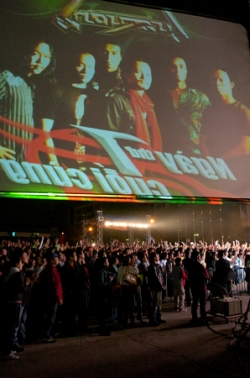 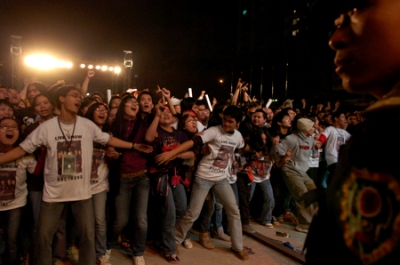 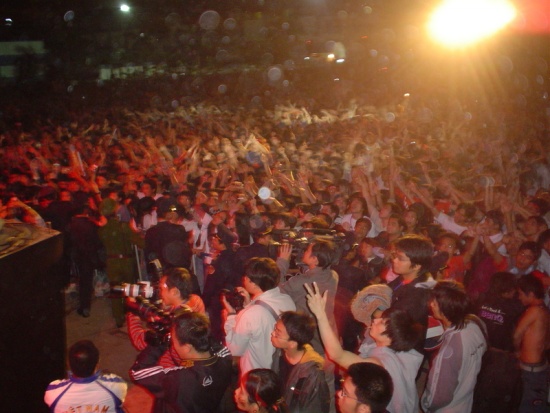 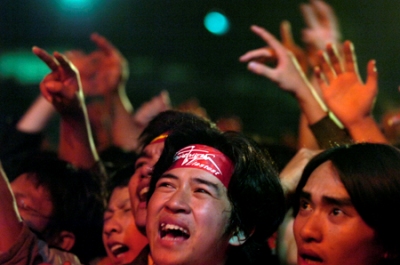