If there’s a syndrome such as “airport tension” where one gets nervous whenever at an airport then I have it. I think because of going away at a young age, solo travelling for years, and hanging out at airports so many times, that airports tend to associate with paperworks, procedures (which I’m always afraid because I’m very forgetful) and farewells. At airports, especially at Noi Bai airport in Hanoi where I first said good bye to my family to go to Australia at 17, I usually get incredibly nervous and nausea, no matter if I travel domestic or international, by myself or in a group, and even get nervous when I’m not the one going.

Anyway, today when saying good bye to my SO at Noi Bai (after having car sickness on the way there of course), I saw a girl after she had sent her friend through the gate. She told another friend on the phone: “I miss him terribly already, should I tell him?”.

Well, girl… all the best with LDR. 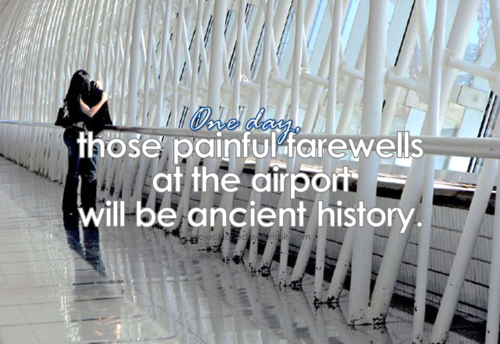 Photo is credited to an awesome artist also in LDR at http://project-oneday.tumblr.com/